from the Historical Society of the Massapequas Newsletter
Volume III, Issue III, May, 2008, page 2 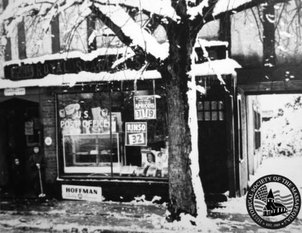 This childhood chant came to mind when I was reminiscing about heading down Front Street in Massapequa Park to the Royal Scarlet Store on Park Boulevard.  The brick and Tudor building that today houses the Irish Cottage, stands much as it was then, with storage on the restaurant side, and the post office and grocery store where the bar is.  I close my eyes and envision the long wooden counter running on the left and mail boxes to the right.  The wall behind the counter was filled with shelves offering all kinds of canned goods, soap powders, cereals, and the like.  On a rack, a big bag of potato chips was 10 cents, find a friend with a nickel and share.

The store keeper, Mr. O’Rourke, lived upstairs with his family, some of us kids called him “Uncle Dan” and he knew all of us by name.  Mama didn’t grocery shop there, for Big Ben’s was a larger less expensive store in Amityville, but she would sometimes send us down for a loaf of Tip Top Bread, or for the mail.  Best of all, there by the cash register, was a most tempting array of penny candy!  Oh the choices!  Mary Janes and Tootsie Rolls, strips of paper with little colored dots to pull off with your teeth, miniature wax bottles with syrupy liquid inside, you bit off the top and chewed the wax afterwards.  Black licorice pipes and candy cigarettes with red tips, Peanut Chews, Bazooka Gum and Red Hots, the longer you sucked the hotter they got! For a nickel I could have ice cream, but that wasn’t often, nickels were scarce.

According to the shopper, or the list, Mr. O’Rourke would take each item off the shelf, add up each price with a pencil on a piece of paper, and put the goods in a brown paper bag.  As he was also Post Master, on the opposite side amongst the mail boxes was a window for stamps and such, and if you couldn’t reach your mail, he would go behind the counter and get it.  Our box number was 114.  If I stood on my tiptoes I could reach.

In rereading, I wonder why we walked down Front Street  instead of Clark (then a street began at Broadway in the Park) and suspect it was because there were only two houses between Second Avenue, where I lived, and Park Boulevard.  The walk was mostly wooded and often deserted.  But, on Front Street along the tracks, there were eight homes and big smelly black steam engines!   If you waved to the engineer he blew the whistle and waved in return.  I’ll have one of those Rootbeer Barrels please!